"Do not depend on the hope of results. You may have to face the fact that your work will be apparently worthless and even achieve no result at all, if not perhaps results opposite to what you expect. As you get used to this idea, you start more and more to concentrate not on the results, but on the value, the rightness, the truth of the work itself." -- Thomas Merton

« Tolerance and Non-Violence for Columbus Day | Main | Educrats Versus Children » 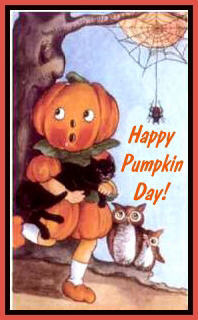 A big boo-hiss to the principal of Kohl Elementary School in Broomfield, Colorado. She's banning Halloween.

Halloween, as it is currently celebrated in the United States, is purely secular ... its pagan religious roots were buried in an avalanche of consumerism many, many years ago. The holiday, however, is one of the most popular of the year ... my own children have said that it is their second favorite holiday, after Christmas, of course.

Yet, right here in the metro area we witness yet another school administrator who has become a control-freak. The consequences of this power-trip will be to make Kohl Elementary less joyful, more somber, a place of incessant testing and fear of just about everything.

I've also included in this post a link and excerpts from a report in a similar vein about a school in the Chicago area that has banned hugging. Yup. "Rampant hugging" at Oak Park's Percy Julian Middle School has caused the principal there to issue a 'zero tolerance' decree to stop this suddenly unacceptable behavior. Maybe talking, smiling and all social interactions among young people should be prohibited ...

You have to wonder what is going on ... are school administrators so successful in getting our children educated that they have plenty of time to issue rules and decrees controlling every aspect of a student's daily rountine? Or have high-stakes standardized testing, countless politically motivated curriculum mandates from state and federal governments, and the 'Columbine syndrome' turned administrators and principals into, well, bureaucratic zombies?

The Kohl Elementary School principal needs to back-off this no-Halloween edict ... we want kids to want to come to school, right?

Addendum: I heard part of an interview with this Kohl Elementary School principal on a local radio program this morning. Listening to Principal Cindy Kaier would make any normal person retch -- politically correct drivel, educrat-ese jargon, and a smug "we know best" attitude oozed out of this woman's mouth -- this is precisely why public confidence in public education is deteriorating. How teachers who genuinely want to teach and instill the joy of learning in children can stand to work for a self-approving functionary like this is beyond my understanding.

By the way, here is the link to the Kohl Elementary School Web site ... there you can find contact information.

There won't be little ghosts and goblins at Kohl Elementary School this Halloween.

In a newsletter sent home to parents, Principal Cindy Kaier wrote that the traditional Halloween party celebrated in classrooms each year will be replaced by a fall party on Friday.

And because the party is focused on fall, not Halloween, children can't wear costumes.

Parents expressed frustration that they weren't included in the decision.

Brook Kimber said it's hard to explain a random Oct. 5 party to a child.

The decision came after a discussion that culminated in an "emotional" meeting with teachers that focused on school holiday parties and how Kohl could continue to celebrate without leaving out anyone.

Schools just say no to bullying and fighting, but hugging? ...

... "Last year we would see maybe as many as 10 students on one side (of the hallway), 10 on the other and then, going in opposite directions, would sort of have a hug line going on and you could see where that would be a problem," said Victoria Sharts, principal of Oak Park's Percy Julian Middle School.

So this year Sharts decided to draw the line on hug lines by banning all hugging among students within the building.

Sharts said, "Hugging is really more appropriate for airports or for family reunions than passing and seeing each other every few minutes in the halls."

When teachers started enforcing the new policy last month all hallways and classrooms in the 860-student school became hug-free zones.

When our cameras rolling during passing period today there was no hugging to be seen.

Her father agrees with her.

"It seems like a crazy idea to me," Mark Miller said.

The principal says the rampant hugging is creating bottle necks in the hallway and making kids late for class. Furthermore she says although hugs are supposed to be handshakes from the heart some times they don't seem so innocent. ...

... Sharts said the hug ban is just one element of a comprehensive discipline and anti-bullying plan. High-fiving in the hallways is also frowned upon.

Posted at 07:59 AM in Issues-Education | Permalink

The comments to this entry are closed.