"Do not depend on the hope of results. You may have to face the fact that your work will be apparently worthless and even achieve no result at all, if not perhaps results opposite to what you expect. As you get used to this idea, you start more and more to concentrate not on the results, but on the value, the rightness, the truth of the work itself." -- Thomas Merton 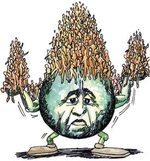 There he was yesterday, Colorado's U.S. Senator Ken Salazar promoting an 'immigration reform' plan that will further hurt our environment and the standard of living for working class Americans.

This headline should be enough to cause doubt and concern: 'Bush Hails Deal on Immigration Reform'.

We all know that virtually everthing Bush has done and proposed has been to benefit the mega-transnational corporations, this new 'immigration reform' deal -- if passed into law -- would a dream-come-true for the oligrachical elitists who want to turn the United States into a low-wage nation. The Dimocrats who negotiated this scheme demonstrate the corrupting power of big campaign contributions from special interests; the Dims also seem to be operating under the vague impression that somehow increasing the pool of exploitable labor by millions and millions will pay-off in votes for them someday.

This plan would 'legalize' up to 20,000,000 illegal aliens already in the country, and in the future permit over a million new 'guest workers' and people with a host of various visas to enter the country every year.

My biggest objection to these 'immigration reform' proposals, however, has been their effect on our environment (see my definitive position on immigration and population HERE). I am willing to break the political taboo and talk about over-population and the ecology of the nation and the planet -- we simply cannot afford millions and millions more human beings striving to grow into the natural-resources-consuming footprint of the American lifestyle.

The important link is the increasing consequences of global climate change, burning tremendous amounts of CO2 producing fossil fuels, the Peak Oil concept -- and billions and billions of people needing/wanting the electrical power generated by oil and coal.

The rising price of oil and gasoline provides a graphic picture of the relationship between how many of us live here on the Earth and our impact on the environment. We are over 300 million people now in the United States; over 6.6 billion human beings on the planet. What does this over-population mean in real terms for us?

How did this tremendous increase in human population on Earth happen? You'll see the explanation clearly in the graphs shown in the first article linked to below. In a word, of course, the answer is: OIL.

So, when gasoline climbs to over $3.00 a gallon, the reason why is simple. The energy transnational corporations know Peak Oil is coming, yes, indeed, therefore, they are 'conspiring' to generate as much profit as they can ... while they can.

If you might be inclined to believe that new technology will allow us to mitigate Peak Oil by turning to coal liquification for electric battery power produced from coal-steam power plants ... well, in the second link, I've got more bad news for you: Peak Coal.

We are in a difficult situation. The rise in human population is bringing the economic crisis of Peak Oil upon us faster and faster. Yet, even with the knowledge that global warming is already impacting us, there is actually very little being done to substantively disengage us from carbon-based energy sources.

It is common sense, therefore, that the last thing we need right now for the future health of the planet is more people joining the one society that pumps more greenhouse gases into the atmosphere than anyone else. The honest goal for America should be to reduce our population, not add to it by allowing more immigration -- legal or illegal.

Finally, I have posted links here to a couple of articles about and by Dr. Ali Samsam Bakhtiari, retired "senior energy expert," formerly employed by the National Iranian Oil Co. (NIOC) of Tehran, Iran.

At the root of all the converging crises of the World Problematique is the issue of human overpopulation. Each of the global problems we face today is the result of too many people using too much of our planet's finite, non-renewable resources and filling its waste repositories of land, water and air to overflowing. The true danger posed by our exploding population is not our absolute numbers but the inability of our environment to cope with so many of us doing what we do.

... a summary of the conclusions of a recent study by the Energy Watch Group (EWG) on future global coal supplies. That study, “Coal: Resources and Future Production ,”  published on April 5, found that global coal production could peak in as few as 15 years. This astonishing conclusion was based on a careful analysis of recent reserves revisions for several nations.

The EWG report has enormous implications for climate change, global energy, and particularly for future electricity supply and steel production in the US and China. Previously, virtually everyone in the fields of energy policy and energy analysis—as well as nearly everyone involved in discussions about climate change—had assumed that the world’s coal endowment was so enormous that no limits would be encountered anytime this century. The EWG’s conclusions turn this assumption on its head. ...

... The three primary take-away conclusions from the new coal study are as follows:

• “World proven reserves (i.e. the reserves that are economically recoverable at current economic and operating conditions) of coal are decreasing fast….
• “The bulk of coal production and exports is getting concentrated within a few countries and market players, which creates the risk of market imperfections.
• “Coal production costs are steadily rising all over the world, due to the need to develop new fields, increasingly difficult geological conditions and additional infrastructure costs associated with the exploitation of new fields.”

Posted at 07:58 AM in Issues - Immigration | Permalink

Elegy to the American Middle Class

I'm Mr. Lefty-liberal. Actually, closer to socialist in many ways (think Gandhi, not Stalin). So it's likely a big surprise that I'm in favor of doing all we can to stop illegal immigration, short of mining the borders. It's also a surprise considering someone in my own family was an illegal immigrant, and who is now a resident alien under the last amnesty program.

At the moment, I favor no immigration of any kind. I think we need a multi-year moratorium. Then we can work to figure out who is here and why, and then decide who is to stay and who is to go. I'm sure we have people here, now, that we don't want. Let's get about the business of securing the nation from them, especially in our post-9/11 era.

The other day, I saw Ted Kennedy and President Doofus standing symbolically in agreement on an immigration bill they want to fast track. This thing is going to be rammed through Congress by Memorial Day unless we can stop it dead in the Senate. If not, it will be Memorial Day for the US economy and the notion of national sovereignty.

So far, the bill sounds really, really bad. What's odd is Ted Kennedy, a staunch union supporter, favors it. What's up with that, I wonder?

If we were a socialist country, this wouldn't matter. The more the merrier. The safety net could handle any short-term adjustments. But it's not. We live in a country without a safety net. We live in a country where potholes can't be filled, Medicare is being stripped of its funding, and the military-industrial complex is gobbling up every spare penny in its own defense (and sure as heck not yours and mine). Very soon, I predict we will have gasoline shortages, just like in the third world. I would not at all be surprised to see shortages of natural gas and electricity, next, like back in the days of bad-old Enron.

We are being squeezed economically so that the only growing economic class is the working poor. This is a direct result of a "free" trade policy and various forms of illegal immigration, from the importation of Latin America's unemployed across our porous southern border (and the exportation of their unemployed to the US), to the importation of billions of foreign workers a day through out ports of entry. After all, when we import goods and services from abroad, it's as though we allow all those workers into the US every day, isn't it? It's as though we throw the borders open every day, invite billions in to work, and then they leave without paying a nickel in taxes. Now that's the dumbest guest-worker program I've ever heard of. It's simply insane.

The only way I would support the proposed immigration bill is if it included a tariff on all imported goods and services. Let's say an American is paid $1 to make a broom. And let's say the foreign worker is paid $.30 to make the same broom. I say the tariff should be the difference: $.70. That money could go to pay down the debt, fund the safety net programs necessary to mitigate the added social costs from illegal immigration, and build-out alternative energy systems. It would also bring industry back to our nation, and stop our free-market fall into third world status.

I expect the Banana Boat Republicans to take us down the road to the third world. They've betrayed the country since the 1920s, so why stop now? But I'm really, really angry with the Democrats. If they don't start standing up for our nation, its workers, and our sputtering economy, I say it's time to give them all the heave-ho and create a party that will provide for the common defense, promote the general welfare, and secure the blessings of liberty for us and our descendants.

This is only a preview. Your comment has not yet been posted.

The letters and numbers you entered did not match the image. Please try again.

As a final step before posting your comment, enter the letters and numbers you see in the image below. This prevents automated programs from posting comments.

Having trouble reading this image? View an alternate.

(You can use HTML tags like <b> <i> and <ul> to style your text. URLs automatically linked.)

(Name is required. Email address will not be displayed with the comment.)